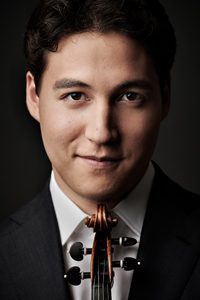 Ken Schumann was born near the German city of Cologne into a family of musicians. He began playing the violin as a four-year-old and made his début with orchestra at the age of 10. He received his violinistic training from Zakhar Bron, Thomas Brandis and Heime Müller, with Pinchas Zukerman and Gerhard Schulz providing further important guidance.

He has established a reputation as an outstanding violinist, winning first prizes at several international competitions. Ken has taken part in the chamber-music course run by the Kronberg Academy, Germany, and the “Keshet Eilon International String Mastercourse” in Israel. A workshop for early music with Franzjosef Maier in 2001 served to deepen his knowledge of baroque music, in which he maintains a profound interest.

He has received the encouragement award from the Düsseldorf-based banking association RSGV and the “Culture Prize” from the City of Pulheim. Ken has also been given scholarships by the German foundations Jürgen-Ponto Stiftung, Werner Richard-Dr. Carl Dörken Stiftung, Villa-Musica Mainz and Oscar and Vera Ritter-Stiftung.

As a member of the well-known “Schumann Quartet”, he appears regularly at major concert venues and festivals across the world. The ensemble is represented by the agency Impresariat Simmenauer in Berlin. In addition to his quartet work, Ken performs as violinist and violist in the Wupper-Trio. He also plays as concertmaster in the Cologne Chamber Orchestra and Hamburger Camerata.