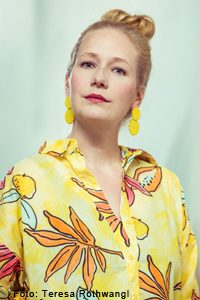 Judith Thielsen has been part of the Cologne Opera ensemble since the 17/18 season. Since then she can be heard in various roles. These include Death in Stravinsky’s “The Nightingale”, Mercédès in “Carmen”, Saint Margaret in “Jeanne d’Arc – Scenes from the Life of Saint Joan”, the title role in Benjamin Britten’s “The Rape of Lucretia”, Tisbe in Rossini’s “La Cenerentola”, Ravel’s “L’enfant et les sortilèges”, Schönberg’s “Pierrot lunaire”, forester / owl in Janáceks “The Cunning Little Vixen“, drummer in “The Emperor of Atlantis”, Charlotte in “The Soldiers”, Page of Herodias in “Salome”, Fricka in “Die Walküre für Kinder”, 3rd elf in “Rusalka”, Beautiful Helena / The lady in the Offenbach pasticcio “Je suis Jacques” as well as Balkis in “Barkouf ou un chien au pouvoir «. In the 2017.18 season, Judith Thielsen made guest appearances at Komische Oper Berlin in Ravel’s L’enfant et les Sortilèges and at Theater Basel as Annina in Verdi’s La Traviata. In the annual critics’ survey of the magazine »Opernwelt« in 2018, she was named ›Most remarkable young artist‹. In summer 2019 she made her debut as Larina in “Eugen Onegin” at the Bregenz Festival. Furthermore, she made her debut with the Orchester Les Siècles in the 2019/2020 season with Beethoven’s 9th Symphony under the direction of François-Xavier Roth. In the 2020.21 season she will appear at the Cologne Opera as 3rd Lady in Mozart’s “Die Zauberflöte”, as Angel 2 / Marie in George Benjamin’s “Written on Skin”, as Marthe in Gounod’s Faust and as Lady in Hindemiths „Cardillac“. Before joining the Ensemble of the Cologne Opera, she was a member of the International Opera Studio of the Cologne Opera for two seasons and made guest appearances in the 2013.14 season at the Kiel Theater, among others. Judith Thielsen completed her studies at the HfMT Hamburg with Prof. Geert Smits. During her studies, she received several awards and was funded by the German National Academic Foundation, among others