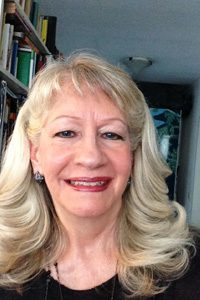 Andrea Andonian (mezzo soprano) was born in Colorado, USA. She earned her Bachelor’s Degree (Music/Voice Major) at Stetson University, and her Master’s Degree (Music/Voice Major) at the Cincinnati College-Conservatory of Music. After her initial engagements in Germany with the Cologne Opera studio and the theater of Krefeld/Mönchengladbach, she was a House soloist from 1985-2016 at the Cologne Oper. During this time she sang all the roles in the lyric mezzo repertoire, including Dorabella, Idamante, Cherubino, Ramiro, Annio, Melanto, Siebel, Hänsel, Lucretia and Cenerentola, among others.  She has made guest appearances at the Deutsche Opera in Berlin, the Royal Opera House Covent Garden, the Music Festival in Dresden, and the Opera Comique in Paris.  With the Cologne Opera she sang in the Shanghai Grand Theater (Wagner Ring Cycle) and in the Royal Opera Muscat in Oman.