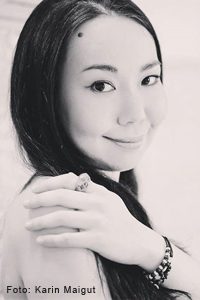 Aliya Turetayeva was born in Almaty, Kazakhstan, and received her first piano lesson at the tender age of five. She was soon accepted into a special music school for gifted children in Almaty, and during her first year of studies there,
she gave her debut performances, both as a recitalist and as a soloist with orchestra. During her early education,
she performed at many festivals, and performed at masterclasses, including those given by Professor
Vladimir Krainev in Kiev and by Professor Yuri Slesarev ​in Almaty. She appeared on several occasions as a soloist with the Chamber Orchestra and State Symphony Orchestra at the ​State Philharmonie and at the Kazakh Concert Hall in Almaty. After graduating from the specialized music school, Aliya was accepted into the Dresden University of Music at the age of 16.
Two years later, she moved to Cologne and continued her studies at the Hochschule fuer Musik und Tanz Köln as a student ​of Professor Pavel Gililov. She was awarded her Masters degree in 2010.

As well as her work as a soloist, Aliya is a dedicated chamber musician. She recently recorded chamber music works by G. Crumb and A. Schnittke for WDR Radio Cologne. She was also supported through the bursary and scholarships, kindly donated by the London Masterclasses  and Playing for Gold International Summer Academy in Norway.
She will join the piano faculty of the Internationale Akademie für Musik Köln / Cologne from the next academic year.

Aliya completed her Konzertexamen postgraduate studies at the Mozarteum University in Salzburg under the tutelage of Professor Gililov with the highest mark and has continued her studies at the Royal Conservatory of Brussels in Belgium. She has additionally studied with Professor Norma Fisher und Professor Ronan O’Hora in London.